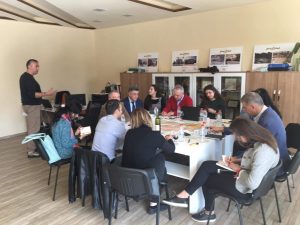 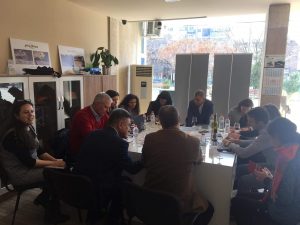 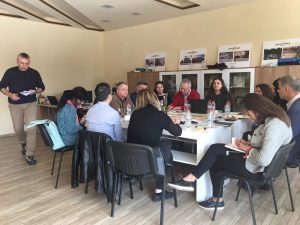 First focus group on the development of wine tourism in Thrace

On March 6, 2020, a meeting on the topic “Wine Tourism in Thrace” was held at the office of the Organization for the Management of the Thracian Tourist Region. The group consisted of representatives of industry organizations, tour operators, journalists and university teachers from the Plovdiv region, who are actively working in the field of wine tourism.

The focus group was led by Gavrail Gavrailov – Executive Director of Organization for the Management of the Thracian Tourist Region. Within the preliminary scenario, key concepts, attitudes and direct observations of the participants were discussed. Important conclusions were drawn about the future of the wine tourism sector in the Thrace Tourist Region, which is one of the two leading specializations according to the National Tourism Zoning Strategy in Bulgaria.

Wine tourism in Thrace
The meeting commented on what is meant by “wine tourism” and “Thrace”, from which it became clear that there is an aspiration for fragmentation of the region of typical residential districts – Rhodope Yaka, Sakar, Eastern Rhodopes, Srednogorie. Specialists agreed that wine tourism includes tastings, cellar visits and a meeting with winemakers, as well as organizing thematic wine events, visits to specialized and thematic festivals and exchanges. To enhance the wine culture of tourists, a win-win combination of history, culture and terror must be found to draw people to the wineries in the area. The lack of information and a comprehensive wine map of the Thrace region is still a major problem. Good practices include the activities of Enoteca Sakar, the unification of the Rhodope Yaka cellars, the work of Plovdiv tour operators, and the wine guides in some cellars, such as Villa Yustina and Katarzyna Estate. Less developed in wine tourism are the westernmost and easternmost parts of the region around Pazardzhik and Yambol.

What do we know about wine tourists?
Typical profiles of wine tourists emerged:
· The ideal tourist is a Bulgarian who after visiting a particular cellar would become a regular customer and make recommendations to his friends.
· Desired tourist – this is a debutant who has no wine culture yet and is inclined to try new and unfamiliar things.
The inaccessible tourist at this stage is a foreigner with high financial resources and a rich wine culture, which lacks information. When visit the country side, he strugles poor infrastructure and a lack of restaurants offering a combination of local wine with local food near the cellars.
· Real tourists are now more foreigners than Bulgarians. More Bulgarians are looking for a hotel in the countryside, and the wine cellar is a bonus to a wider range of services.

A strategy for the success of wine tourism
Most cellars are not initially built with a focus on tourism. They are now offsetting or adapting their strategy, but lack experience and approach and are probably not doing well. There are also no statistics at regional level on the pace of development and what the cellar desires to profit from tourism. The gaps come from the lack of a comprehensive approach. It is not intended to advertise local varieties, they are more unfamiliar and are not exploited. Municipalities also need to be involved in terms of roads, signs and advertising. Wine tourism does not need to over-invest in a hotel or restaurant, sometimes a nice table, nice glasses and good wine in the middle of the vineyard is enough. The most important are the winemakers with good ideas. The small cellars are at the forefront of wine tourism in Bulgaria.

The symbols of the region and the connection with culinary traditions
Popular symbols such as rose and chariot are overexposed and have already become kitsch. Suitable symbols for wine tourism are the ritual vessels of the Thracian treasures, the Bacchanalia, the Roman bath and drinking, the wine-religion connection. If a graphic symbol for wine tourism is to be drawn, a cluster of grapes or a rhyton must be stylized. There is no modern style in the look of wine and Thracians. Thrace is generally a region where Thracians lived, which also includes parts of Turkey and Greece. Perhaps the most popular international symbol for Thracians and wine is the Panagyurishte treasure vessels.
Local customs and food are not actively used in this sense. There are almost no combinations of wine and local food when tasting in the cellars. Good examples of this are the efforts of the small family-run wineries in Sakar, which offers ration and farm cheeses from the area, and the Harmanli Culinary Festival is organized, combining local varieties as incense with Sakar-specific foods. Thracian wine events and festivals are becoming increasingly popular and prolonging the tourist season. As a whole, Sofia is shaping up to be a major place for more professional events. Festivals with a touristic focus are better off in the countryside – the “Young Wine Fair” in Plovdiv, “Augustiada” in Stara Zagora, the “Rose Festival” in Kazanlak. In the cellars, events are more standard – around Trifon Zarezan and grape harvesting, but there are also music events – rock and jazz festivals.
Are climate change threatening the wine tourism?
So far this does not feel like a global threat, but in some terroirs it is already having an impact. Scientific conferences are being held on this topic, and there are changes in climate conditions and hence in tourism potential. The discussion took place just a week before the state of emergency, and the topic of the coronavirus was not discussed. However, it is obvious that such global threats will occur more frequently, which will make people in this industry more flexible in order to survive.
Legal framework for wine tourism
It was argued that it is generally better to have regulations within the industry rather than hollow legal texts. The Excise Duty and Tax Warehouses Act now has restrictions on access for outsiders, which is not always respected because of tourists’ interest in seeing the cellar inside. Consideration should be given to how this regime can be liberalized. For now, it is better that there is no regulation in the Tourism Act. The participants’ recommendations were to make a few more detailed focus groups and invite winery owners. The idea of ​​making a wine map of the Thrace region was unanimously supported. Some of the participants emphasized on the group way out of the crisis in wine tourism and saw the sense to become a member of a regional organization, such as the Organization for the Management of the Thracian Tourist Region
Following the end of the coronavirus crisis, the next steps in the strategy for developing wine tourism in Thrace are forthcoming.